After getting the cabinet home, I took a bunch of pictures (both inside and out) so I can have something to compare the finished product to and to track my progress. The cabinet is in decent shape but there is a lot of work to be done to get it looking like it just came out of the factory.

Here are a few shots of the entire cabinet from several angles to give you an idea of what I'm going to be working with. The existing side art will have to come off first. 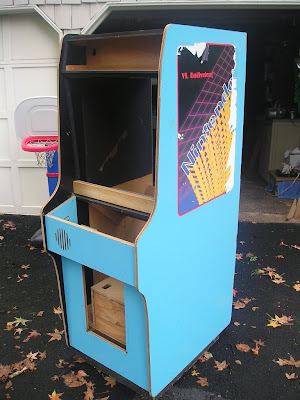 The next shot shows the cabinet from the other side - the side art is already peeling off! Maybe I'll get lucky and it will come off easily. 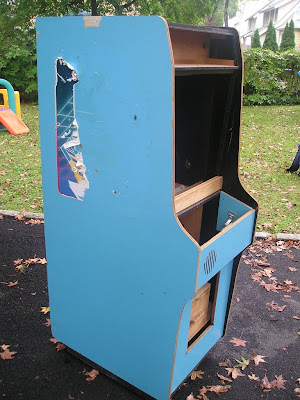 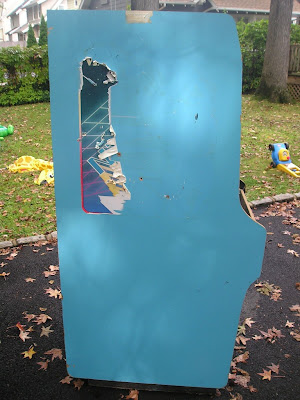 I don't know if you can see but there are multiple holes punched through both sides that will have to be patched. It appears as though this cabinet was converted from a Donkey Kong to a Nintendo Vs. cabinet at some point. The vertical Donkey Kong monitor would have to be turned on its side (or replaced) because the Nintendo Vs. games all ran on two(!) horizontal monitors stacked on top of one another. The holes are for the various supports for the monitors. The original Donkey Kong cab had two bolts on each side in order to support a monitor bracket - right through the side art! Even though I'm going for authenticity, I think I'm going to make some minor design "improvements" along the way and this will be one of them - no bolts through the side panels!

Finally, here is a shot of the back of the cabinet. I really should take some head-on pictures of the front and back but this will have to do for now. You can see the two holes cut out near the top - this was for transporting it around. There are two casters on the bottom so all you have to do is tip it back onto the wheels and grab it by the two openings. It is quite easy to move around. 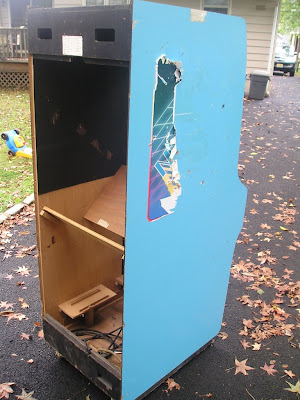 I will post some close-up shots later but I can already tell that the back part is going to be the toughest to restore - plus, the back door was missing when I picked it up so I'll have to make an entirely new one!
More later.
Posted by Some guy on the Internet at 6:00 AM No comments:

Over the holidays I asked my dad if he wanted to help me restore the Donkey Kong and he agreed! He is very handy and I think it will be a lot of fun to spend time working together. We are planning to set aside a few Saturdays in the Spring once the weather gets better. The first steps will be:

Once all that is finished we will be well on our way. I can't wait to get started!
Posted by Some guy on the Internet at 6:00 AM No comments:

Since I'm going for authenticity I will be including the "Back Door Operation Sheet" that was stapled to the inside of the back door of an original Donkey Kong cabinet. Here is a pic of what it looks like:

I'm not sure if I'll be using the same monitor or even running a Donkey Kong board on the inside so the operation sheet might be a little misleading but hey, no one will know except me... the goal is to restore the cabinet to be as "authentic" as possible so every little detail matters...
Posted by Some guy on the Internet at 6:00 AM No comments: