Bear with me on the next few posts - in all the excitement and since my dad was helping me out I didn't take as many pictures as I would have liked but I will do my best to explain exactly what I did.

The first thing I had to do was cut a piece of MDF exactly the width of the inside of the cabinet with a hole in the middle for the monitor to poke through. Getting the dimensions of the hole was difficult because all of the sides are curved and I had to make sure not to remove too much material. I came up with a method that ended up working but took way longer than it should have. If I ever have to do this again I think I could make it pretty quick.

Anyway, I cut some poster board into some long strips and taped them together end to end. Then I wrapped the poster board around the outside of the monitor. This was done in order to trace the shape onto a piece of cardboard. I figured if I could make a hole in some cardboard that would fit exactly around the monitor I'd be able to use it as a pattern to place it in the MDF. 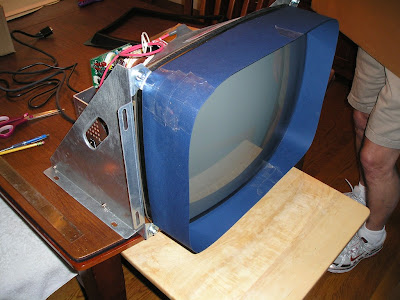 Next I cut out the shape I just traced onto pizza box #2 and fit it around the monitor - much better! I ended up having to make a few tweaks with some more blue painter's tape because I was cutting the cardboard freehand but I eventually got a really nice pattern. Then I centered it onto the MDF panel that will hold the monitor and I cut it out (free hand with my router after rough cutting with my jigsaw). It worked!

The next thing I had to do was remove the triangular brackets from the sides of the monitor (remember, the whole point of this exercise is to remove those things because they stick out of the back of the cabinet). Once that was done, the monitor cannot be put down! I quickly positioned the MDF panel I had just cut out around the monitor and located the holes for the bolts in each corner. I drilled out the holes and bolted the monitor in place - success! 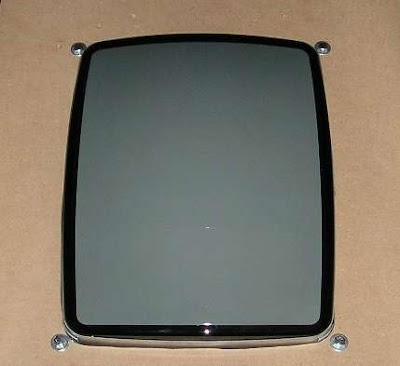 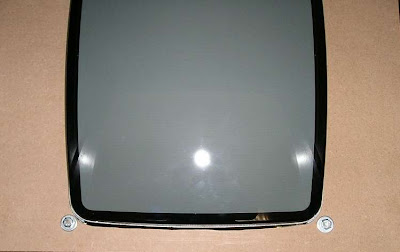 These aren't the best pictures of the panel but you get the idea - the pizza box pattern was for placing the monitor in the MDF and then I had to drill a hole in each corner for the bolts - I had to be precise with everything because the bolt holes are so close to the monitor cutout but you can see on the bottom that my freehand skills with the router aren't the best.
Whew! This was the easy part...