After getting the monitor into the frame I had to figure out a way to support the frame from the inside of the cabinet at the proper angle and not drill into the side panels. I had my dad slide the MDF panel with the monitor into place (the Donkey Kong cabinet had a mounting bracket for the original monitor still in there so he rested it on there): 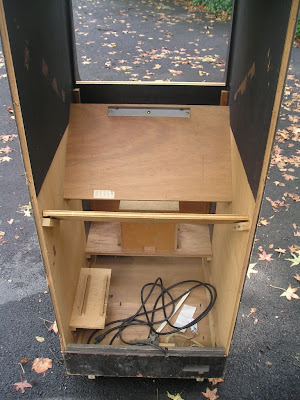 Once I thought it was at a good viewing angle we drew a line underneath the panel on both sides which represented the spot where we wanted the panel to sit. All we had to do was build some legs for it. We ended up using some 2x4s to build a frame - imagine a table with 4 legs and cross braces except the table top is set at a sever angle. That's all there was to it but coming up with the design was far easier than actually building it. I don't know why but getting all of the measurements just right really took a long time. This is what we ended up with: 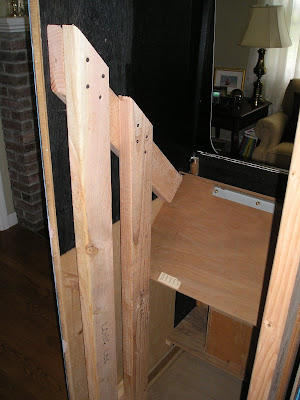 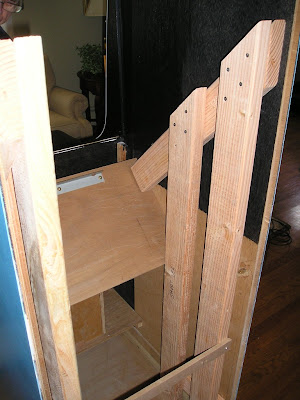 The MDF panel holding the monitor would sit on top of the 2x4 frame - all done! Well, not quite... In our infinite wisdom, we didn't take into consideration the weight of the monitor. We lifted the monitor and slid it in place expecting everything to be perfect (tight fit, eh?): 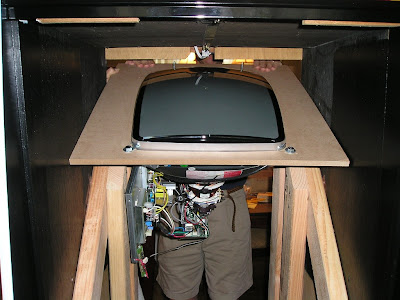 The problem was since there was nothing actually holding the frame to the cabinet, gravity wanted to force the entire structure, monitor and all, out the back of the cabinet. We felt like idiots for not thinking of this sooner. We were running out of time in the day (a Sunday) and we couldn't leave the exposed monitor in the MDF - we had to figure this out!

After brainstorming for about an hour the solution finally presented itself. I had some spare angle brackets lying around from when I mounted the new base to the bottom of the cabinet. The support pieces we cut for the top of the frame just happened to be long enough to almost touch the plywood where the original mounting bracket was located. We installed a bunch of angle brackets using bolts (not screws) which prevented the frame from tipping backwards and moving at all. 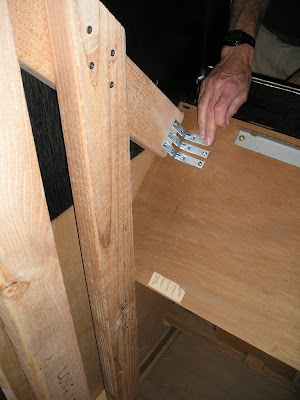 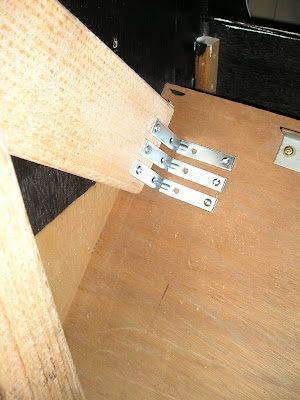 We were so happy this ended up working without seriously modifying the back of the cabinet (which is what most of our ideas centered around).