Next up, installing the monitor. This was so difficult and I definitely could not have done it without the help of my dad (and mom!). From the start of this project I knew the monitor mount would be tricky because I was going to deviate a bit from the original design. I did not want to put bolts through the side of the cabinet in order to support the monitor like this (thanks for the pic Neilyboy):

I don't know why... maybe I just didn't like the thought of poking holes in the side art. The problem with wanting to do this is that the sides are only 9/16" thick which isn't nearly enough material to screw into to support a ~50 lb. monitor so I had to think of a way to get the monitor at the proper angle and supported from the bottom. 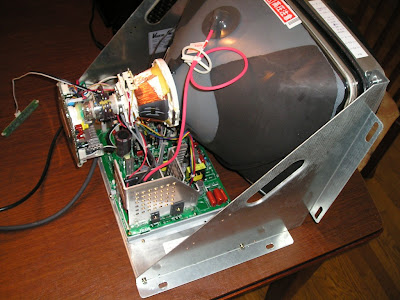 The final problem was making a frame for the monitor. After removing the triangular brackets there was no way to actually mount the monitor! Did I figure it out?

I think you DID figure it, seeing the pic in the top right corner of this website :)

Real good solution. I did it like that myself too.

Succes with the final steps restoring this beautiful cabinet!

Some guy on the Internet said...

Haha yeah - it went in pretty nice even though I had a hard time with it. I still haven't turned it on yet though - it better work! If I get the cab running I'll never finish it...

Good luck to you too - yours is coming out GREAT.